Lookout – “The Story of a Mountain” 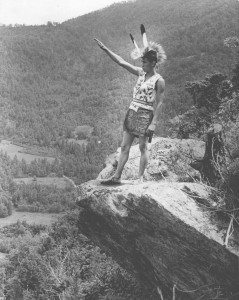 Lookout Mountain was as dear to the Cherokees as it ever has been to the whites. Just how precious a treasure it was to their memory may be surmised from the following story related by an old Indian fifty years after moving west.

Long time now have I lived. Many strange things I have seen, many dangers I have passed through, but not many years will be passed before I will be seen no more. All my people are now gone. No brothers. No sisters. No close kin.

People ask me sometimes to tell about the most terrible thing I remember. They know I was a soldier in the Mexican War and in the Civil War, and they think I tell about great fights with cannons and muskets. But what I tell about is what you call the removal of the Cherokees from the Old Nation.

That was long time ago — fifty years or more — because this is the year 1888 when I tell this story to the people that keep asking for something strange and terrible. When the removal was made, I am, almost twenty years old., born near the foot of Lookout Mountain in 1819. My father he was a soldier in the Cherokee regiment; and he made much fight at Talladega and other places in the Creek War of 1814. But greatest fight he made was at Horseshoe Bend on Tallapoosa River in March 1814. So great fight my father make, he is called Captain by the great white general that got to be President–Jackson was his name. Most everybody say if Cherokee regiment ain’t been there and make fight, Creeks would have won big fight. Log house of my father was in great valley. Close by was big river and great mountain stand high in the skies. Council house was not far away. Many Cherokee live in valley. They raise much to eat and want no trouble anybody. Cherokee quit fighting white people in few years after was with redcoats from cross waters. Cherokees settle down and want to live in peace and be friends everybody.

Some years later they lived that way, and then there is much talk made how new President is much in favor to send all Cherokees away. They say they helped President when he was fighting Creeks and guess that he’ll now be friend to them. But time pass by and news come from President that Cherokees will have to leave to new land. Still Cherokees won’t go. They say they’ll stay and maybe so times will get better. But not, they get worse, and soon big prison pens are built and all Cherokees that won’t get up and leave are put in pens, and when cool weather is come, big march for West is made.

Seven thousand soldiers, men with cannons and muskets, guard the Cherokees and at head of soldiers rides great big man what’s name is General Scott. The General, he says he don’t want to shoot Indians with guns, but they must be quiet and don’t try to make trouble on trail.

Long time we travel on way to new land. People feel bad when they leave old nation. Women cry and make sad wails. Children cry and many men and all look sad– like when friends die, but they say nothing and just put heads down and keep on going towards the West.

Many days pass and people die much. My father, now old man, is walking along and all sudden fall down and can’t get up. One day he live in covered wagon and is dead. We bury him close to Trail and go on. A week passes and Mother cry out one day and fall over — she sneak no more and we bury her and go on. Three weeks pass and my two brothers and three sisters all get sick and die, and each day until all are dead. We bury them by the trail and go on. Lots of other die every day and so we go on. We bury and march. Soon there is more dead and we bury them and go on. Look like maybe all dead before we get to new Indian Country, but always we keep marching on, and all the time there is cry made from wagons where is old people and children. All day and all through night is crying and moaning. People say sometimes look like I never smile, never laugh in lifetime. Long time I am live in hills and many good people live close by, but most time, I keep thinking of Old Nation and wonder how big mountain look in spring time and how boys and men used to hunt down the river and in great valley and then there come before me picture of march on long trail that lead to far West and then my heart feel so heavy and sad.

Maybe some day we will understand why Cherokees had to suffer on new trail to New Country.

The Indian name for Lookout Mountain was Chatanuga. Some writers claim it means “Rock coming to an end”.