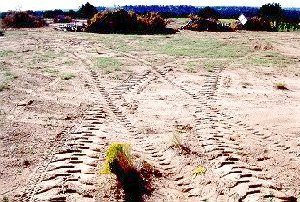 Early in the morning on August 17, Hopi Tribal staff were already hard at work. In a definitive act of asserting Hopi jurisdiction over its land, the Hopi Tribe dismantled the site referred to as “Camp Anna Mae”, where a recent Sundance as well as other unauthorized gatherings have taken place.

Protected by Hopi Rangers, BIA Police, and Navajo County Police, Hopi staff worked quietly and efficiently, tearing down the structures left at the site, including the Sundance tree, and loaded the materials onto trailers for removal from the site.

The police accompanied Hopi staff to provide security for the dismantling crew as well as the public. A few minor incidents occurred as the police provided information to those in the area and passersby on the Tribe’s activities and attempted to steer traffic away from the site, but the majority of the dismantling proceeded without incident. Signs have been erected in the area notifying the public that the area is not authorized for public gatherings.

“Both Marsha Monestersky and Arlene Hamilton were excluded from the Hopi Reservation in 2000,” noted Cedric Kuwaninvaya, Chairman of the Land Team. “Yet they were both caught on Hopi land this past week. They claim to be human rights activists but by deliberately disobeying the laws of the Hopi Tribe they violate the rights of the Hopi to control access to and use of their lands.”

A handful of local residents gathered as Tribal staff cleared up the last debris, but no further incidents occurred and the convoy of trucks, trailers, police vehicles and a bulldozer left without trouble.

At least one local Navajo resident has requested additional police monitoring in the area, in fear for the safety of her family and property because of possible repercussions from the Navajo trespassers living at Big Mountain. In addition, the Hopi Tribe alerted Hopi ranchers with livestock in the area to be on the alert for possible hostile overtures and livestock harassment from the Navajo trespassers. Hopi field monitors were also placed on alert.

Kuwaninvaya added, “This is just one of the steps that the Hopi Tribe will be taking to enforce its jurisdiction over the Hopi Reservation. We will keep a close eye on the former site of Camp Anna Mae to ensure that the trespassers do not try and establish another camp at which they hold unwanted gatherings and celebrate their lawlessness.”