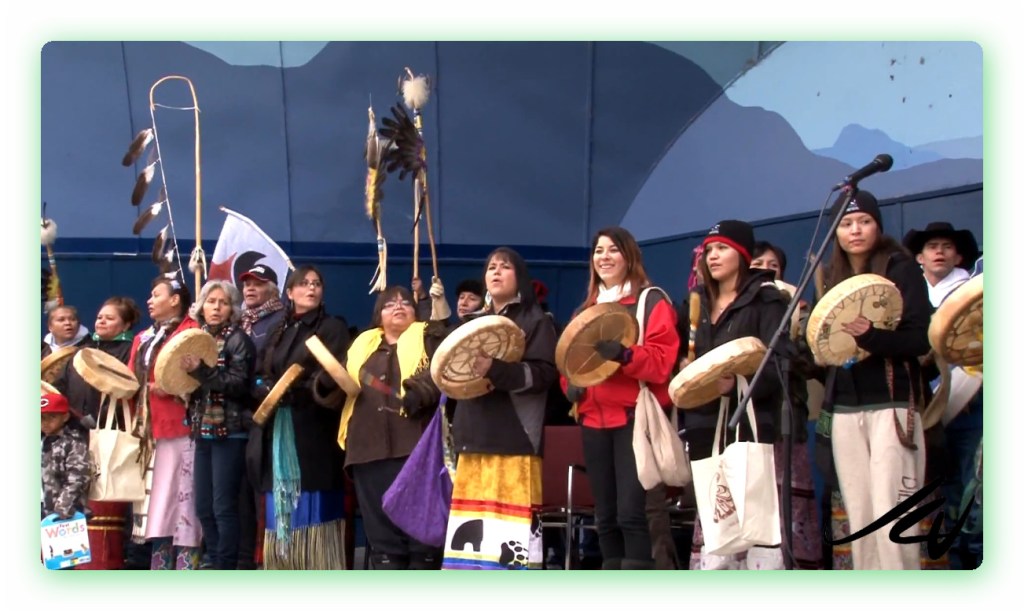 As women of the Mohawk Nation and as progenitors of future generations of the Haudenosaunee, it is our duty and responsibility to ensure that the lands are secured for future generations. As our women dance the Women’s Dance, we are constantly reminded of our connection to the land as our feet quietly shuffle across the earth. As Onkwehonwe, we are told through oral tradition that the reasons we are placed here on this earth is to be caretakers of the land. We are again reminded of this in the Ohenton Karihwentekwa, the opening Thanksgiving Address to the Natural World, and in the ceremonies that follow the natural cycle of seasons.

Contrary to popular rhetoric, that there is a portion of the community of Kahnawake that is against any economic development, the Women of the Longhouse in 1989 adopted certain principles for economic planning, which are as follows:

Future Generations Come First
“Whereas there are many pressing issues of an economic nature that face the Kanienkehaka, short-term solutions are not enough. The People have the immediate responsibility of preserving what there is today. When they seek opportunities and resources, they do so for the future.”

The agreement signed with Archer Daniels Midland is for fifty years, our future generations will be left with serious environmental and health consequences as a result of this decision. We must take into consideration the concerns of our youth today and listen to them, they are the ones who will still be here in fifty years.

Planning for Sovereignty
“The Kanienkehaka are building a nation. In order to function as such, they must attain substantive economic independence. They must plan for and acquire resources that will sustain their people in this endeavor.”

Leasing our land is not sovereignty. Mohawk sovereignty includes the development of an economic plan based on certain principles which encompass who we are as Onkwehonwe People. In providing this land base adjacent to the Kahnawake Survival School, we are promoting the wealth of multi-national companies at the expense of our health and future generations. This is a high price to pay.

Environmental Conservation
“The People know the value of their land. Only those initiatives that will preserve or enhance the environment will be acceptable to them.”

No Drugs – No Alcohol
“The Kanienkehaka also know the worth of each person amongst them. The abuse of drugs and alcohol by any member weakens the community as a whole. No initiative based on addictive substances will be acceptable to the People.”

This principle would ensure a better future for our Nation.

Balancing Individual Rights with Those of Collective
“Each member of the community is to be respected for what he or she contributes to it, so the opinions and rights of the individual are very important. Progress to wards an economic plan for Kahnawake must be made by consensus. However, no individual can come before the community as a whole. Dissenting opinions are of value when they contribute alternatives to flawed proposals, but the majority must rule in order for the chosen project to have the support it will need to work.”

The collective rights of the People have been violated by the Kahnawake Mohawk Band Council in assuming jurisdiction and signing the Agreement in Principle in April of 1997. Contrary to the Band Council’s insistence that a final document has not been signed, an agreement in principle means it is a done deal. The only document that is left to be signed is the agreement concerning the final details between Archer Daniels Midland and the Kahnawake Band Council.

The Importance of Cooperative Enterprise
“The People have made the equitable distribution of collective wealth a fundamental goal of their economic planning. This leads to the priority that will be given the consideration of cooperative community development proposals in this exercise.”

In this deal the collective wealth will be allotted to the shareholders of Archer Daniels Midland and the Kahnawake Mohawk Band Council. This does not necessarily mean the collective majority of Kahnawakeronon will directly benefit from such an agreement. Up to this point, there has been no report made by the Kahnawake Mohawk Band Council on monies received from Archer Daniels Midland in preparation for this project. The success of cooperative enterprise is based on accountability.

Communications
“For both the children and the nation, the Kanienkehaka must preserve their language as an expression of their culture and values. In publicizing this planning process, every effort will be made to use native names and if possible, to present materials in Mohawk as well as English.”

This principle enhances the survival of our culture through the language.

The Women’s Council has come to the decision that based on these Economic Development Principles, the Archer Daniels Midland Grain Storage Facility is a totally unacceptable project. No one has the right to give away our land, therefore it must be stopped immediately. As caretakers of the land, we are responding to the threat of non-Indian encroachment onto our territory and we are prepared to protect our land for the future generations. We invite all women to support our position.