Cry of the Earth – The Legacy of First Nations 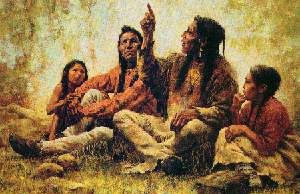 Boutros Boutros-Ghali
Secretary General of the United Nations
I am pleased to welcome to the United Nations those attending this conference on the theme: Cry of the Earth, the Legacy of the First Nations. The Spiritual Elders of the Four Directions have come to New York with a message. It is a message of warning which all of us, regardless of our particular faith, must share.

In 1992, at Rio de Janiero, the world community raised a cry of distress. The cry of distress, of pain at the state of the planet has been heeded. No longer can we take the resources of nature as ours to master. No longer can we behave as the conquerors of nature. The path to sustainable development is to respond to the legitimate aspiration of peoples for better living standards while ensuring that future generations retain the qualities of life in harmony with our habitat.

The responsibility of this generation is tremendous.It is in our power to choke the living organism of nature, but it is also in our power to preserve it, to nurture it, to replace plunder with harmony and waste with conservation.

The concerns of sustainable development come late, but not too late. We have known all along, with the poet William Blake: “For everything that lives is holy, life delights in life.”

Today, the Spiritual Elders come to remind us of this truth. It is my sincere hope that we come to share their concerns and their delight in life. Welcome then to the United Nations; to your United Nations.

S.R. Insanally
President, 48th Session
United Nations General Assembly
Prophesy is that form of vision that informs and propels the truest moral and spiritual leadership…Every true leader must possess such vision, as well as the courage to follow it despite whatever hardships might be thrown in the way.

Today we meet as leaders who aspire to such vision. In this United Nations Year of the World’s Indigenous People, we come together in council with a clear goal in mind and heart; as representatives of many nations together, we wish to and must help to shape a universal pact between humanity and the planet.

They are the patterns of life – the doorway uniting Physical and Spiritual dimensions. it is significant that these belts – having never been held by outside forces – are Spiritually alive. They embody the activating power of the Spiritual World.

The Seven Fires Belts talks of seven doorways, dimensions, traditional nations, spaces in time. Its message is woven throughout Turtle Island, and applies to all four races of Earth. It describes very grave destruction that has currently affected the balance of all life- environmental and spiritual genocide resulting from these doorways being blocked.

It is essential for the Anishnabe – all human beings – to rekindle these fires and reopen these doorways. Joining these Seven Doors, we may light the Eighth Fire – the Double Diamond reunifying human life with the Spiritual dimensions. Forgiveness and sacrifice are the keys. The Belts warn of the very near time when Earth will shift Her balance in the Universe, with or without her children. This rebalancing of Life is certain to occur, reordering both physical and spiritual reality. It is our urgent responsibility to transform humanity and harmonize with these changes.

“Healing must be our imperative concern.”

David Gehue
Spiritual Counselor, Mi-kmac Nation
From the Eastern Door: We are in the final stages of the shaking of the earth, when the Great Spirit takes the earth in both hands and shakes it violently.

It is time for us all to stop blaming one another, heal from our wounds and move forward, for the survival of the world, as we know it, lies in our hands. We must seek out and absorb the wisdom of our elders and use it for the betterment of others. The Great Spirit left a clear and legible path in eastern North America with petroglyphs and natural monuments. This knowledge is kept under guard by our elders and only entrusted to those native people who abide by the natural laws of the Great Spirit; respect, honesty, sharing and caring. Without each one of these, the others do not exist.

It is now time for Moms. Dads, Grandmothers, Grandfathers and children to get involved in the healing of our world. Make it your business too.

Huichol Prophecy
When the world ends, it will be like when the names of things are changed during the peyote hunt. All will be different, the opposite of what it is now. Now there are two eyes in the heavens, Dios Sol and Dios Fuego. Then, the moon will open his eye and become brighter. The sun will become dimmer. There will be no more differences. No more men and women. No child and no adult. All will change places. Even the mara’akame will no longer be separate. That is why there is always a nunuisi (Huichol-little baby) when we go to Wirikuta. Because the old man, the tiny baby, they are the same.

Mayan Prophesy of the End of the Great Cycle,
From The Book of Chilam Balam of Tizimin
When the original thirteen baktuns were created, a war was waged which caused the country to cease to exist. Little by little, however, our enemies came to hear the prophesies of Ahau; but finally even the hope of hearing Ahau is brought to an end, because of the words of opposition. When the need arises for the high authority at the head of the mat to safeguard our children, then we will feel deeply the tragedy of being captives in war; also when we are ordered to obey…And when over the dark sea I shall be lifted by a chalice of fire, to that generation there will come the day of withered fruit…The face of the sun will be extinguished because of the great tempest. Then finally ornaments shall descend in heaps. There will be good gifts for one and all, as well as land, from the Great Spirit wherever shall come sailing, figuratively speaking, bringing the ornaments of which I have spoken, from your ancestors. Then the god will come to visit his little ones.

Perhaps “After Death” will be the subject of his discourse.

Sacred ground is ground that is invested with belief. Belief, at its root, exists independent of meaning. That is, expression and object may escape what we can perceive as defineable meaning. The intrinsic power of sacred ground is often ineffable and abstract. I behold a particular sacred space, and i understand that it is in some way earned. It is consecrated, made holy with offerings – song and ceremony, joy and sorrow, the dedication of the mind and heart, offerings of life and death. The words “sacred” and “sacrifice” are related. And acts of sacrifice make sacred the earth. The indigenous people of the world know this as they know the sunrise and sunset.

Ada Deer
Former Assistant Secretary for Indian Affairs,
U.S. Department of the Interior.
I was born on the Menominee Indian Reservation in Wisconsin, a land of dense forests, a winding river, and streams and lakes that nourish the land, animals, and the people. I am an extension of this environment that has fostered my growth and enriched my vision and spirit. An appreciation and reverence for the land is fundamental to being Indian. I am proud to declare that the Menominee tribal forest is one of the few forests in this hemisphere that is better today than it was one hundred years ago. My vision for Indians in the United States and this hemisphere is enriched by this legacy. We must embrace the challenges of the future fortified by the knowledge of our past.

On Behalf of the Spiritual Elders
Hotevilla, Hopi Nation
We are now living in the fourth and final world of the Hopi. We are at a most critical time in human history. It is a crossroads at which the outcome of our actions will decide the fate of life on earth.

At the beginning of this fourth world the Hopi were told to watch for specific signs which would mark this crucial period and given instructions for actions to avoid the annihilation of this world and for life to continue.

Instructions included a directive to travel to a great house of mica (glass) which would be built on the distant eastern shore of this continent where leaders of this earth’s nations would gather. The Hopi were instructed to knock on the door of this house in order to deliver their message to those gathered there. If refused, they were to knock again, until they had done so four times.

Since 1949, the Hopi have knocked at the door of the United Nations. Last December was the fourth and final time they would do so. Having received an invitation from the United Nations, this historic gathering which Hopi spiritual leaders have requested is the final fulfillment of these instructions.

It is prophesied in our Instructions that the end of the world will be near when the trees start dying from the tops down. That’s what the maples are doing today. Our Instructions say the time will come when there will be no corn, when nothing will grow in the garden, when the water will be unfit to drink…

We were instructed to carry a love for one another and to show great respect for all beings of the earth. In our ways, spiritual consciousness is the highest form of politics…

We must live in harmony with the Natural World and recognize that excessive exploitation can only lead to our own destruction. We cannot trade the welfare of our future generations for profit now…

We must stand together, the four sacred colors of man, as the one family that we are, in the interest of peace. We must abolish nuclear and conventional weapons of war…

We must raise leaders of peace. We must unite the religions of the world as the spiritual force strong enough to prevail in peace.

We are the spiritual energy that is a thousand times stronger than nuclear energy. Our energy is the combined will of all people with the spirit of the Natural World, to be of one body, one heart, and one mind for peace.

The prophesies of the Ancestors of the Lakota Nations have important meaning for the future of Mother Earth. Through the generations, these prophesies have been maintained courageously, methodically and accurately. Now, we are in a critical stage of our spiritual and moral and technological development as nations. All life is precariously balanced. We must remember that all things on Mother Earth have spirit and are intricately related. The Lakota prophesy of Mending the Sacred Hoop of all nations has begun. May we find, in the ancient wisdom of the Indigenous Nations, the spirit and courage to mend and heal.

The door of the United Nations is and will remain open for indigenous peoples.