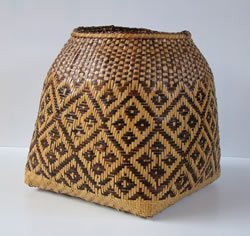 Very few examples of pre-history Cherokee textiles and weaving have survived due to the hot damp climate of the southeastern United States. Items made of organic materials quickly rotted away when they come into contact with the earth. Certain types of materials however have definitely been identified and recorded as having been used by Cherokees for baskets and other woven fabrics.

a.) Wild Hemp. The botanical name for wild hemp is Apacynum cannabinum; the popular name is Indian hemp. A short reference of its use is given in the Payne Manuscripts. Adair (pp. 453-454) gives a long description of its use. Adair said that hemp grew about six feet tall. The stalks were steeped, pealed and beaten until the fibers separated. (A similar process is used to prepare flax for making linen fabrics. Ed.) Then, the fibers were spun on a wooden spindle with a perforated pottery disk or simple clay disk used for a spindle whorl.

b.) Mulberry Bark. The Payne Manuscripts are the authority for the use of Mulberry fibers by the Cherokees. The bark was stripped from the tree roots and only the inner layer was used. Adair (pp. 454-455) says that mulberry was an alternative to hemp for fibers. The earliest description of the use of Mulberry bark as a fiber was recorded by Ranjel, one of narrators of the DeSoto expedition (Bourne. Vol. II, pp. 87-88), and while it refers to Muskhogean Indians, it is legitimate to infer that Cherokees handled it in the same way. Ranjel described the thread as just a fine and white as any linen thread used in Europe, ca. 1540. The Natchez Indians, according to De Pratz (Vol. 2, pp. 192-193), pounded the inner bark to make the fiber finer and thinner and then bleached it by leaving it exposed to the dew. (Dew bleaching was a common way to brighten cotton fabrics by the early Americans before bleaching liquids were commercially available. Ed.)

c.) Animal Hair. The Payne Manuscripts describes the use of white Opossum hair to spin into thread and then dyed. Bear hair was used to make black thread. Adair (p. 454) is an authority on use of Bison hair for spinning thread. While not mentioning Cherokees specifically, Natchez, Choctaw and Carolina Indians used bison hair. The widespread use certainly must have included the Cherokees, since Cherokees made use of buffalo meat and hides. In fact, Timberlake (p. 73) said that buffalo hair supplied all the purposes of wool for the Cherokees.

e.) Wood Splints. The use of white oak and ash splints for weaving baskets is not mentioned until the time of Bartram (p. 298) in 1776. It is probable that all splint basketry and mat making was not developed until steel knives and axes became available to the Indians by the Europeans in the early historic period.

Adair (p. 456) speaks particularly of the high esteem that people of South Carolina had for Cherokee split cane baskets; he quotes the rather high price paid for a nest of eight or ten baskets of different sizes. He used the term “beauty and skillful variety” in reference to Cherokee baskets. Elsewhere in the same account, he mentioned the use of several colors in the double weave type and the variety of designs. The largest ones in a nested group he described as being a foot deep, a foot and a half broad and almost a yard long. Many, he said, were the double (walled? Ed.) type. In an account of historic baskets by Speck, the Cherokee name for cane baskets is given as ihya taliwidza. In addition to the storage type (described by Adair) and small flat baskets used for serving food (mentioned by Timberlake. p. 61), other traditional types of baskets include: a deep pack basket with a capacity of a bushel that is wider at the top; flat sieve baskets with both fine and coarse openings for sifting flour and grits; and a fish basket. Adair describes a long tapering fish crail or trap that was made of either cane or hickory splints. Handles on baskets were not traditional.

There is little doubt that Cherokees made mats as fine as any of the other Southern Indians. The Payne Manuscripts makes reference to cane mats being used in ceremonies in the Council House. These were usually made in a twilled weave. The Chitimacha types, examples of which can be seen in museums, probably represent the general type of these mats. Charred fragments of such mats, preserved in archaeological sites in eastern Tennessee, indicate that they were used extensively in both council houses and homes. Mats were also used for wrappings for burials.