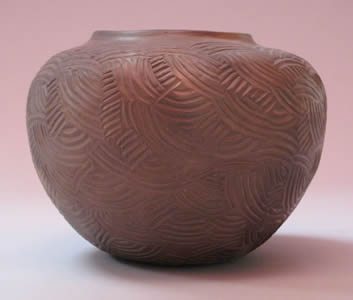 Mooney, ca. 1888, and Harrington, ca. 1908, described the Cherokee method for making clay pottery. The following description is based on their observations.

The Cherokees have several names for pottery. The word unti’ specifically is used in reference to the large jar; a pot is called tu sti’ and bowl is dewa li’.

Clay. The clay described by both Mooney and Harrington came from the north bank of Coco Creek near Macedonia Church. Cherokees used two types of clay:
1.) Fine-grained, dark brown clay for pipes;
2.) A courser, sandy, light gray clay mixed in equal parts with the dark brown class for pottery vessels.

1. Digging the Clay. Clay from the creek bank was dug and shaped into a cake about fourteen inches long and in the shape of a loaf of bread. It was allowed to dry. A stone pestle or ax head was used to pulverize a piece of the dried clay on the hearthstone.
2. Preparing the Clay. A large wooden tray was used when the clay was moistened. As water was added, the clay was thoroughly pounded with a hammer stone and kneaded with the hands. Sometimes, extra fine sand was added at this stage. When ready to shape, the clay was the consistency of putty.

3. Shaping a Vessel. A ball of the prepared clay was worked into the shape of a small bowl to make the case of the vessel. Then, the outside was beaten with a wood paddle that was dipped in water now and then. Then the bottom was laid on a piece of cloth on a small saucer of china (obviously after European influence. Ed.) or gourd.

For larger jars, a basket containing fine sand and covered with a cloth was used as a support. The edges of the base were pinched thin with the fingers, and a long thin cylinder of clay was attached to the inner side of the base with about half of it projecting above. The ends of the coil were joined and then the coil was banded to the base by pinching and smoothing with the fingers. This, again, was thinned at the top and another coil was attached. This overlapping strengthened the wall and was continued until ready for the rim. As each coil was added and blended, the vessel was set aside and let dry for a few minutes before the next coil was added. The rim coil was attached to the outside and blended in the usual way.

Finally, the rim was pinched, or notched with a stick. (Cora Wahyahneetah (location not given. Ed.) grooves each edge before adding the next coil. She molds the outer edge of the new coil downward and the inner edge upward.) When the shaping was finished, the vessel was let dry until quite firm before stamping. Sometimes the surface was scraped and rubbed before stamping. A shell was usually used for scraping; a quartz pebble was often used for rubbing.

4. Stamping the Surface. Cherokees used carved wooden paddles, called gastoli’, to harden the surface of the vessels and create patterns on the surface. The paddles were kept wet and strokes were quick and hard. The deeper and more complex patterns on the paddles made the clay firmer. This welded the clay and caused dovetailing across any possible small cracks that may have formed in the coiling process.

5. Drying and Polishing. After paddling, the vessels were set aside from one to three days to dry, depending on the size of the vessel and the weather. Then the inside was rubbed and polished with a smooth stone polisher, which was kept wet during the process. The higher the polish, the more waterproof the vessel became. Polishing also consolidated the clay and reduced cracking. The vessels were set aside to dry completely.

6. Firing. Pottery was fired outside on a hearth made of flat stones sunk level with the ground. A hot fire was built and the vessels were propped on their sides around the fire with their openings toward the blaze. When the vessels turned slightly brown all over – about an hour – they were rolled into the embers, mouth down, with a long stick. Then, two or three inches of dry bark was piled around and completely over them. The bark had to catch fire and burn evenly all around to get an even heat. After an hour the bark burned completely away. Then, if there were no cracks, the firing was done. It was often necessary to replenish the fire because the pots needed to become red hot.

7. Smoking the inside. While the vessels were almost red hot, they were turned over and a handful of bran or chipped up corn cobs was thrown into each. The vessels were tipped back and forth until this blazed up; then they were turned upside down on the blazing material until it was completely burned up. This made the vessel waterproof on the inside.

8. Additional Comments. Cherokees made smooth surface pottery they may have been paddled with a smooth paddle and then polished with a stone. Sometimes they used slips – thin solutions of different kinds of clays – were applied to form designs. They probably applied with a small rag or a piece of leather as a mop. Slip was applied when the pots were completely dry and before firing. The slip acts as a sizing. It must be rubbed and polished while damp because it cannot be polished when dry. Then a little grease or lard was put on a small cloth and rubbed over the surface. The damp slip kept the grease from soaking into the surface of the pot. The vessel was then set aside to dry completely before firing. Firing may be done in as little as a half an hour or may take as long as an hour. Free circulation of air does not change the color of the clay like the smoldering fire. (Carbon from the smoke is drawn into the pores of the clay and turns it black. Navaho potters use a similar process; they use sheep dung to smother the fire. Ed.)

In general, pieces of dry kindling, six to eighteen inches long give a hot even fire. Large vessels were fire alone or at most with a few small pots placed around them. If the ground is damp, a fire should be built ahead of time to dry it out, otherwise steam is generated and the pots will crack. Most of the ancient Cherokee pot rims were as thick, or slightly thicker, than the pot walls. Many of them also curved outward. This not only prevented chipping during firing, but kept the rims from breaking during use. Round bottoms were traditional; flat bottoms came later.

Incised decorations, which were carved into the surface before the pots were totally dry, was sometimes used. A small stick with a well rounded blunt point is better than a sharp tool. Generally, incised decorations were more characteristic of pre-history Creek pottery, but Cherokee and Creeks acquired ideas from each other, probably due to captured women introducing alien customs.

The size of vessels ranged from small cups and bowls to great cauldrons (According to Timberlake. p 100) that held as much as twenty gallons. In addition to large jars and the usual pots and bowls in a range of sizes, Cherokees made large shallow pans – about twenty inches wide and about four inches deep – used as covers for baking bread on a flat hearthstone. Two examples of these were found in a refuse pit at Chote.