How Effective Was Navajo Code?

by The People | History, NAAIP Articles 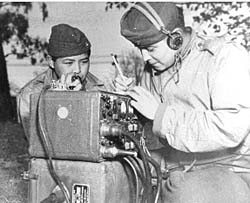 By the close of World War II, Army Sgt. Joe Kieyoomia shared something with the secret words employed by the Navajo Code Talkers: both were like granite against Japanese efforts to break them.

Captured after the fall of the Philippines in 1942, Kieyoomia lived 43 months in Japanese prison camps. A member of New Mexico’s famed 200th Coast Artillery unit, he survived the notorious Bataan Death March that killed thousands of starved U.S. soldiers.

As a POW, Kieyoomia lived on meager meals of rice laced with weevils. He says he watched as weakened Americans were ordered to dig their graves, then were shot by Japanese guards.

“At the end of one week, they told me I was going to be next,” says Kieyoomia, 72. “But a few days later, I was sent to the Japanese mainland.”

Kieyoomia says his captors at a Nagasaki prison initially tortured him because – judging from his surname – they thought he was Japanese-American.

“I told them I was Navajo,” Kieyoomia says, his crystal-blue eyes turning defiant behind a wrinkled face and a pair of bifocals as he sat outside his remote home on the Navajo reservation and told his war story.

“They didn’t believe me,” he says, shaking his head. “The only thing they understood about Americans was black and white. I guess they didn’t know about Indians.”

After months of beatings, Kieyoomia says, the Japanese accepted his claim to Navajo ancestry. But he says the torture that followed was worse.

“One day two Japanese women visited me,” he says. “They wrote Navajo words in English and asked what they meant. So, I told them: “This means bird, this means turtle, this means water.”

Kieyoomia says he now thinks the Japanese were baffled after hearing the Navajo Code Talkers speak in their language, which was unwritten at the time. Unable to comprehend the sounds they turned to their captive Navajo.

The code, used by Navajo Marines to relay information across the Pacific, had the Navajo language as its basis, but developed a secret vocabulary in which armaments were renamed as everyday Navajo words.

When the Japanese questioned Kieyoomia his translations were useless.

“I didn’t know about the code,” he says.

One winter day, a guard marched Kieyoomia – stripped naked – from his tiny cell onto an icy parade ground. Kieyoomia says the Japanese told him he couldn’t return inside until he revealed the Navajo code.

“It was 27 degrees outside. They made me stand one hour in snow this deep,” he says, spreading his hands six inches. “The guard said if I moved, he would shoot me.”

Finally granted permission to return Kieyoomia says he couldn’t walk because his feet had frozed to the ground. He says the guard shoved him, causing the skin on the bottom of his feet to tear. “I left my soles on that parade ground,” he says.

Beatings continued almost daily. Kieyoomia says at one point, he could not longer use his right leg.

“I wanted to die,” he says softly. “Many times, I thought I was close.”

He survived the second atomic bomb dropped by the Americans on Nagasaki at war’s end, saying he was protected by the concrete walls of his cell. He was abandoned for three days after the bombing, but says a Japanese officer finally freed him.

Years later, Kieyoomia says, he learned of the Code Talkers and their accomplishments.

“I salute the Code Talkers,” he says as he displays his 12 service medals, framing a handsome portrait of his Army youth. “And even if I knew about their code, I wouldn’t tell the Japanese.”