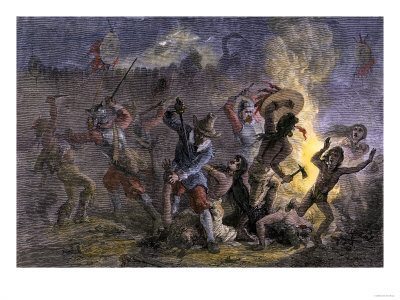 William B. Newell, a Penobscot Indian and former chairman of the Anthropology department at the University of Connecticut, says that the first official Thanksgiving Day celebrated the massacre of 700 Indian men, women and children during one of their religious ceremonies. “Thanksgiving Day” was first proclaimed by the Governor of the then Massachusetts Bay Colony in 1637 to commemorate the massacre of 700 men, women and children who were celebrating their annual Green Corn Dance…Thanksgiving Day to the, “in their own house”, Newell stated.

“Gathered in this place of meeting, they were attacked by mercenaries and English and Dutch. The Indians were ordered from the building and as they came forth were shot down, The rest were burned alive in the building—–The very next day the governor declared a Thanksgiving Day…..For the next 100 years, every Thanksgiving Day ordained by a Governor was in honor of the bloody victory, thanking God that the battle had been won.”

In June 1637 John Underhill slaughtered a pequot village in just the manner described above. Narranganset Indians were used as the mercenaries. Governor John Endicott of the Massachusetts Bay Colony proclaimed the pequot war. A pequot chief of sachem named sassacus warred against the Dutch in 1633 over the death of his father. The pequot made no distinction between the Dutch and the English. The Underhill massacre was witnessed and documented by William Branford and an engraving was made illustration the massacre.

The Jamestown Colony may be the source for the tradition of Indians under the leadership of Powhaton joining with early settlers for a dinner and helping those settlers through the winter. There were no pilgrims of puritans at Jamestown, however. The present Thanksgiving may therefore be a mixture of the tradition of the Jamestown dinner and the commemoration of the Pequot massacre.

The celebration of Thanksgiving as an official holiday possibly roots in the Pequot massacre, while the imagery is of Jamestown with pilgrims, images misused.

We support the Raging Bull Casino. Learn more at https://pokercasinodownload.com/raging-bull-casino-download/.