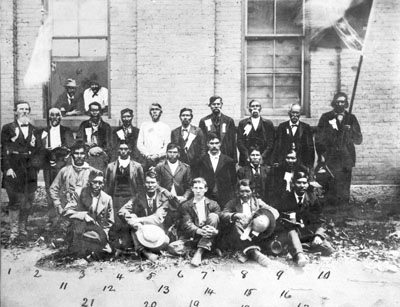 Companies and their Commanders: First Organization

In addition, Thomas J Parks was designated to lead Company M, but this does not appear to have materialized.

ORGANIZATION. On July 12, 1861, Stand Watie received a commission from Brig Gen Benjamin McCulloch to raise a regiment. At a mass meeting of the southern sympathizers among the Five Civilized tribes held at Old Fort Wayne, Delaware District, in the Cherokee Nation, on July 27, 1861, organization of the First Cherokee Regiment began. After the twelve-month enlistment time expired, the regiment was reorganized around 12 July 1862 at Spavinaw Creek, Tahlequah District, for 2 years, with mostly new officers and many new men. Note that the companies were not reorganized separately, rather a set of new companies were formed and new officers elected, although the majority of the men continued in service from the first organization.

Companies and their Commanders: SECOND Organization

ORGANIZATION. Company A was mustered in 12 May 62 in Maysville, Ark. Companies B to K, plus Acridge’s, Alberty’s, Brewer’s, and Patton’s are all on record as having enlisted 12 July 1862 at Spavinaw Creek, Tahlequah District, Cherokee Nation. On September 1, 1862, another company – John Vann’s – was added, made up mostly of loyal men from Drew’s late regiment. The five unnumbered companies were on February 3, 1863, merged with Bryan’s 1st Battalion, Cherokee Partisan Rangers to form the 2nd (Adair’s) Cherokee Mounted Volunteers.

ORGANIZATION. At a mass meeting at Tahlequah 21 August 1861, the Cherokees decided to seek alliance with the Confederate States, and also to raise a mounted regiment. Each of the nine districts of the Cherokee Nation raised one company, except Tahlequah, which furnished three. By October 7, the day the treaty between the Cherokee Nation and the Confederacy was signed, the regiment was almost completed. At Fort Gibson, on November 5, 1861 the regiment was officially mustered in for a period of twelve months, with 1214 men on the rolls.

Drew’s regiment, composed mostly of full-blood Cherokees («Pins») hostile to Stand Watie and his followers, never identified with the Southern cause. During the pursuit of the Creek dissident Opothleyahola in December 1861, officers and men refused to fight, deserted in large numbers, and many even joined the enemy. A reorganization of the regiment was attempted, and about 500 of its men fought at Pea Ridge the first day (March 7, 1862), where they scalped some Federal soldiers. A Union invasion of the Cherokee Nation in July 1862 resulted in the mass surrender of most of Drew’s men, and their subsequent enlistment in the Federal 2nd and 3rd Indian Home Guard Regiments. A few officers and men (notably Colonel Drew, Captains John Porum Davis, Pickens M Benge, Richard Fields, and Lieutenant Charles Drew) remained loyal to the Confederacy and later served under Stand Watie. Captain John Vann’s company of Watie’s 1st Regiment, later Co I of the 2nd Regiment (formed 1 Sep 62), was composed mostly of loyal Confederates from the ranks of Drew’s late regiment.

ORGANIZATION. Joel M Bryan was authorized by Brig Gen Albert Pike to raise 100 men or more as partisan rangers during the summer of 1862. The company (A) was mustered in at Fort Davis, Canadian District, Cherokee Nation, July 20, 1862. Bryan proceeded to recruit another four companies, and was ordered by Maj Gen Thomas C Hindman to organize the force into a battalion, which was done September 13, 1862. Records indicate that the enlistment term was three years.

ORGANIZATION. This company was mustered in at Webber’s Falls, Canadian District, Cherokee Nation, 12 December 62, for two years. The last record of the company is dated June 30, 1863, it may have been assigned to the 2nd Regiment as Company L after that date.

ORGANIZATION. On April 1, 1863, Col Watie was authorized to raise a Cherokee brigade. After the 2nd Regiment had been formed, steps were taken to enlist another unit. The first company (A) was probably organized on 3 June 63, but details about the other companies are missing. Consisted of 4 companies by December 1863. The battalion was apparently broken up and consolidated with the 1st and 2nd Regiments about 12 July 64.

A general reorganization of the Cherokee forces took place on Limestone Prairie, Choctaw Nation, after Watie had been promoted Brigadier General and the Cherokees on June 27, 1864, had declared their unanimous reenlistment for the war. On July 11, the Cherokee National Council passed a conscription act, which required that all able bodied free citizens between 17-45 report for duty before August 1.

ORGANIZATION. Not much is known about this organization, which is mentioned in Brig Gen Douglas H Cooper’s correspondence in March and May of 1865 and in a Federal report dated 23 Apr 65, then supposed to be at Fort Towson (in the southern Choctaw Nation), 300 strong. Joel M Bryan, who previously led the 1st Partisan Ranger Bn, was the commander. Captain John Miller led a company, and a Captain Owens another.

NOTES:
1st (Meyer’s) Battalion, Cherokee Cavalry is a “paper” organization that never existed. Major Benjamin W Meyer may have received authorization to raise a battalion early in the war, but he never did.

Brigade Staff Upon Watie’s promotion to Brigadier General in the summer of 1864, he was entitled to appoint staff officers to the following positions:

COLONEL. William Holland Thomas, Col of Thomas’ NC Infantry Regt 27 Sep 1862, which was a month later increased to a Legion. Relinquished field command of the Legion about 1 Sep 63 (officially in command until March 1865), except the Cherokee Battalion, which he personally commanded until war’s end.

ORGANIZATION. The nucleus of the battalion was the «Junaluska Zuaves», a North Carolina militia company of Cherokees organized in Quallatown in May 1861 by William H Thomas. Company A was mustered into CS service April 9, 1862, at Quallatown. Company B was organized in Knoxville, Tn, on May 18, 1862, by a division of the over strength Co A. In July 1862, these two companies formed part of Thomas’ Infantry Battalion. The battalion was increased and reorganized as Thomas’ NC Infantry Regiment on September 27, 1862, in Knoxville. The Cherokee companies then became Cos C and D, respectively. In October, another battalion (Walker’s) was added to Thomas’ command, which thereafter became known as Thomas’ Legion of Indians and Highlanders. In January 1863, the two Cherokee companies reverted back to their previous designations as Co A and B of the Infantry Regiment (Love’s), Thomas’ Legion. The Cherokee companies were detached from the regiment in September 1863, and from then on served as a separate battalion under Thomas’ direct command (who at that point relinquished field command of the Legion). Company C was added in Quallatown in December 1863, and Company D organized in the summer of 1864. Not until April 9, 1865, however, was the Cherokee Battalion officially mustered as a separate unit of Thomas’ Legion. At that time the battalion reportedly totalled about 300 men.