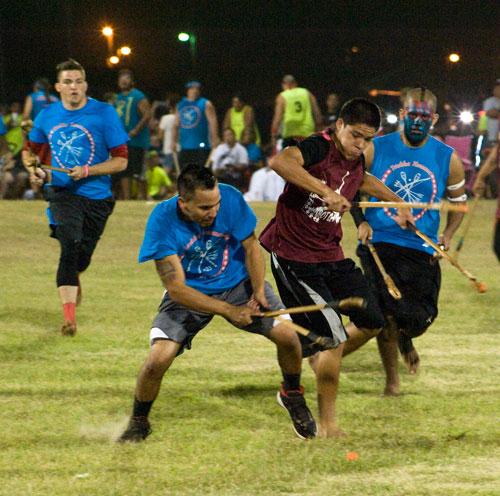 Many years ago, not long after the removal of most of the southern nations to new homes west of the Mississippi, and some time after many of them had gathered to sign the treaty of Camp Holmes, the Choctaws invited ballplayers from a number of nations to gather for a time of feasting and sport, as had been their custom, at intervals, in their old homelands. One evening during the gathering the Choctaws offered to entertain their guests with the recitation of some great talk from Choctaw history.
Now, among the ballplayers present were many members of the Muscogee Confederation, some Arbeka, some Hitchitee, some Euchee, and several others, who, all being good Creeks, met the prospect of receiving instruction in oratory from the Choctaws with a great yawning indifference.

It was not that the Choctaws had not made many great talks, they told the ballplayers of the other nations, it was simply that if the evening’s entertainment was to consist of stories of great events from the Choctaw past, the Choctaws should not be so modest as to restrict the subject merely to their great talks, when there were so many great events, such as some of their great walks, which might also make a good talk.

For their telling of a great Choctaw walk, the Creeks, after conferring among themselves, chose to tell the story of the great Choctaw walk of the winter of 1785-86, when two renowned Choctaw chiefs, Yockonahoma, Great Medal Mingo of Soonacoha, and Tobocoh, Great Medal Mingo of Congetoo, and their entire escort, thirty-one Choctaw honored men and experienced warriors altogether, walked all the way from the headwaters of the Tombigbee River to the big whiskey party hosted by their new East Coast treaty friends at Hopewell on the banks of the Keowee, near Seneca Old Town in the Carolinas, where they finally arrived, ragged and barefoot and very late, to get big drunk and sign their first treaty with the Americans, the treaty of January 3, 1786.

Why, the assembled ballplayers were asked, do the Creeks consider this to have been among the greatest walks in all of Choctaw history? It was a great walk because, at their first night’s encampment, the Creeks had stolen all of their horses.

Now, the Choctaws had intended to tell a great talk of Aiahokatubbee, the legendary Tichou mingo for Moshulatubbee, Great Medal Mingo of Okla Tanap. But, after hearing the talk of the Creeks, and after all of the assembled ballplayers had finally stopped laughing, they chose instead to tell a great talk of Moshulatubbee’s uncle, delivered upon the occasion of the second treaty between the Choctaws and the Americans:

“I understand our great father, General Washington, is dead, and that there is another beloved man appointed in his place, and that he is a well wisher of us. Our old brothers, the Chickasaws, have granted a road from Cumberland as far south as our boundary. I grant a continuance of that road which may be straightened. But the old path is not to be thrown away entirely, and a new one made. We are informed by these three beloved men that our father, the President, has sent us a yearly present of which we know nothing. Another thing our father, the President, has promised, without our asking, is that he would send women among us to teach our women to spin and weave. These women may first go among our half-breeds. We wish the old boundary which separates us and the whites to be marked over. We came here sober, to do business, and wish to return sober and request therefore that the liquor we are informed our friends have provided for us may remain in the store.” –Homassatubbee, Great Medal Mingo of Ahe Pat Oklahoma, 1801, Fort Adams.

[Author’s note: This was an experiment in making use of historical materials to create new kinds of stories for contemporary storytelling; I read this piece at the Southwest Regional Returning The Gift Conference of Native writers at the University of Oklahoma in July, 1993, and of the 60 or so in attendance from 17 states and one Canadian province, who were poets, novelists, short story writers, and playwrights from quite a number of tribes, no one seemed to be aware of anyone else attempting to do this sort of thing, or if they were aware of it they didn’t mention it to me. Has anyone out there seen anything similar to this sort of technique? (which might be a sort of creative non-fiction?). The setting for the story, the ballgame hosted by the Choctaws, is fiction. For the remainder, some of the historical details regarding the treaty of 1786 are drawn from the front matter of “Treaty With The Choctaw, 1786,” in INDIAN AFFAIRS, LAWS AND TREATIES, Volume 2, compiled by Charles J. Kappler (Washington: U.S. Government Printing Office, 1904), pp. 11-14; the speech of Homassatubbee in 1801 and a few other things regarding the treaty of 1786, such as the Creeks stealing the horses of the Choctaw delegation, are drawn from CHIEF PUSHMATAHA, AMERICAN PATRIOT: THE STORY OF THE CHOCTAWS’ STRUGGLE FOR SURVIVAL, by Anna Lewis (NY: Exposition Press, 1960); and the reference to Aiahokatubbee as a great Choctaw orator is drawn from “Life of Apushimataha,” by Gideon Lincecum, in PUBLICATIONS OF THE MISSISSIPPI HISTORICAL SOCIETY, Volume 9 (1905-1906), pp. 415-485.]