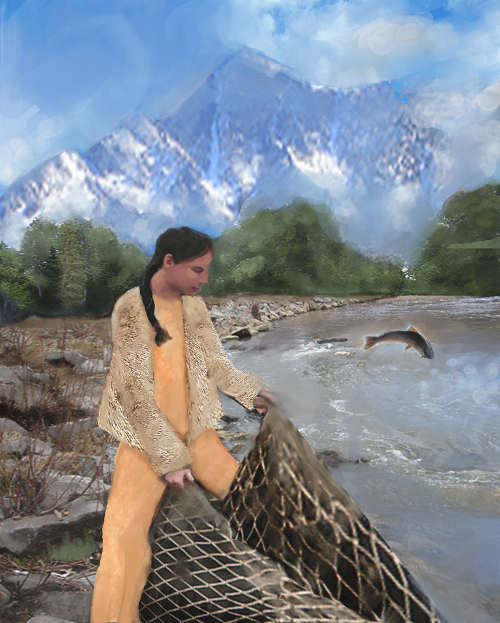 This legend is from the Squamish Nation, Coast Salish, on the west coast of Canada. The Cheakamus River is north of the town of Squamish and flows into Howe Sound.

A long time ago, even before the time of the flood, the Cheakamus River provided food for the Squamish people. Each year, at the end of summer, when the salmon came home to spawn, the people would cast their cedar root nets into the water and get enough fish for the winter to come.

But he looked into the river, and saw all those fish, and decided to cast his net again. And he did so, and it again filled with fish, which he threw onto the shore. A third time, he cast his net into the water and waited.

This time, when he pulled his net in, it was torn beyond repair by sticks, stumps and branches which filled the net. To his dismay, the fish on the shore and the fish in the cedar bark baskets were also sticks and branches. He had no fish, his nets were ruined.

It was then he looked up at the mountain, and saw Wountie, the spirit protecting the Cheakamus, who told him that he had broken the faith with the river and with nature, by taking more than he needed for himself and his family. And this was the consequence.

The fisherman? Well, his family went hungry and starved, a lesson for all the people in his family.