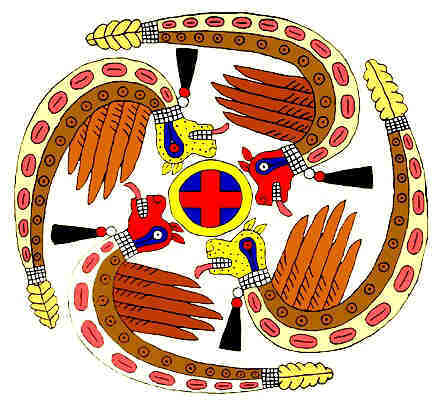 When Deganawidah was leaving the Indians in the Bay of Quinte in Ontario, he told the Indian people they would face a time of great suffering. They would distrust their leaders and the principles of peace of the League, and a great white serpent was to come upon the Iroquois, and that for a time it would intermingle with the Indian people and would be accepted by the Indians, who would treat the serpent as a friend. This serpent in time would become so powerful that it would attempt to destroy the Indian, and the serpent is described as choking the life’s blood out of the Indian people.

Deganawidah told the Indians that they would be in such a terrible state at this point that all hope would seem to be lost,and he told them that when things looked their darkest a red serpent would come from the north and approach the white serpent, which would be terrified,and upon seeing the red serpent he would release the Indian, who would fall to the ground almost like a helpless child, and the white serpent would turn his attention to the red serpent.

The bewilderment would cause the white serpent to accept the red serpent momentarily. The white serpent would be stunned and take part of the red serpent and accept him. Then there is a heated argument and fight. And then the Indian revives and crawls toward the land of the hilly country, and then he would assemble his people together, and they would renew their faith ad the principles of the peace that Deganawidah had established.

There would at the same time exist among the Indians a great love and forgiveness for his brother, and in the gathering would come streams from all over- not only the Iroquois but from all over- and they would gather in this hill country, and they would renew their friendship. And Deganawidah said they would remain neutral in this fight between the red and white serpents.

At the time they were watching the two serpents locked in this battle, a great message would come to them, which would make them ever so humble, and when they became that humble, they will be waiting for a young leader, an Indian boy, possibly in his teens,who would be a choice seer.No body knows where he is or where he comes from, but he will be given great power,and would be heard by thousands,and he would give them the giuidance and the hope to refrain from going back to their land and he would be the accepted leader.

And Deganawidah said that they will gather in the land of the hilly country, beneath the branches of an elm tree, and they should burn tobacco and call upon Deganawidah by name when weare facing our darkest hours, and he will return.Deganawidah said as the choice seer speaks to the Indians that number as the blades of grass and hewill be heard by all at the same time, and as the Indians gathered watching the fight, they notice from the south a black serpent coming from the sea, and he is described as dripping with salt water, and as he stands there, he rests for a spell to get his breath, all the time watching to the north to the land where the red serpents and white serpents are fighting.

Deganawidah said that the battle between the white and red serpents opened real slow but would then become so violent that the mountains would crack and the rivers would boil and the fish would turn up their bellies. He said that there will be no leaves on the trees in thatarea. There would be no grass, and that strange bugs and beetles would crawl from the ground and attack both serpents, and he said that a great heat would cause the stench of death to sicken both serpents.

And then as the boy seer is watching this fight, the red serpent reaches around the back of the white serpent and pulls from him a hair which is carried toward the south by a great wind into the waiting hands of the black serpent, and as the black serpent studies this hair, it suddenly turns into a woman, a white woman who tells him things that he knows to be true but he wants to hear them again.

When this white woman finishes telling these things, he takes her and gently places her on a rock with great love a respect, and then he becomes infuriated at what he has heard, so he makes a beeline for the north, and he enters the battle between the red and white serpents with such speed and anger that he defeats the two serpents who have already been battle weary.

When he finishes, he stands on the chest of the white serpent, and he boasts and puts his chest out like he is conquerer, and he looks for another serpent to conquer. He looks to the land of the hilly country and then he sees the Indian standing with his arms folded and looking ever so nobly so that he knows that this Indian is not the one that we should fight. The next direction that he will face will be eastward and at that time he will momentarily be blinded by a light that is manytimes brighter than the sun. The light will be coming from the east to the west over the water, and when the black serpent regains his sight, he becomes terrified and makes a beeline for the sea.