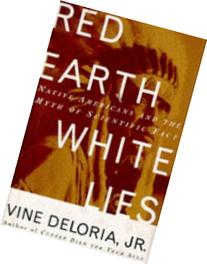 “In Red Earth, White Lies, Vine Deloria, Jr., masterfully challenges the accepted but grossly inaccurate scientific theories of evolution, radiocarbon dating techniques, and the Bering Strait migration hoax. He warns coming generations of scientists, both Indian and white, not to repeat the ethnocentric omissions of the past by ignoring Indian oral tradition…. I have been waiting for this book all of my adult life.”, Renee Sansom Flood, author of Lost Bird of Wounded Knee.
Outline of Chapters

The First Chapter, Behind the Buckskin Curtain, orients the reader toward contemporary American Indian problems generated or aggravated by science, religion and political institutions. It also suggests that there will be two additional books – one dealing with religion and one with politics.

Science and the Oral Tradition basically deals with the fact that there are two ways of looking at data and suggests, since there were so many giants of science that fudged their figures or, like Freud, kept on patients to ensure themselves an income, or doctored results a la Kepler and Mendel, or stole other people’s ideas – re Darwin and Wallace – that what is fed to us as “science” may well be unreliable.

Evolutionary Prejudice highlights the American scholarly failing that since no Neanderthal bones were found in the western hemisphere, Indians must have come here late. In effect many American anthropologists want Indians to evolve from Neanderthal to Cro-Magnon and then cross the Bering Strait. But there are many very early finds here that date as Cro Magnon types and even Leakey knew that Cro Magnon and Neanderthal were contemporaries, and were not in a straight evolutionary line. Once that late date requirement is removed – by American schoalrs joining the rest of the world, then the North American picture looks very different.

The Low Bridge chapter – deals with the Bering Strait and goes outside the Indian area to ask what scholars think of the Bering Strait when they are not focused on Indians – well, it is a mess – they have the Bering land bridge opening every time they want to send some species back and forth between Asia and America in order to maintain their evolutionary trees. So we have bison, horses, mammoths, palm, oak and hickory trees, you name it, all traveling across the Bering Strait – Bob Bakker even has dinosaurs running back and forth. You can imagine the number of Ice Ages that would entail.

Pleistocene Hit Men reviews the Paul Martin theory that Indian ancestors tromped across the land bridge and engaged in a massive blood lust and exterminated some 39 species of megafauna. Martin and his supporters offer virtually no evidence other than that they do notwant to accept a possible world-wide flood.

Corpora Delicti suggests that the missing megafauna are all buried in the Siberia islands and Alaska “”Muck” – which of course most of them are.

Creatues Their Own Size reviews the Indian traditions about the Big Game Animals – most tribes lived when these animals were around – they were scared to death of them and finally a great disaster wiped them out. Some bones – fresh – were found at Big Bone Lick, Kentucky in the 1780s which means some megafauna lasted until almost the American Revolution – one story on the Pacific coast maintains a memory of the sabretooth tiger.

Geomythology suggests that many Indian acounts are eye-witness memories of spectacular geological events. I don’t think anyone would argue that the Klamaths saw Crater Lake explode. I take a lot of the Cascade features and argue that the Indian accounts are reliable – thus there was one major flood at Spokane instead of 80 some – and caused by an earthquake and not by a glacial dam – which C. Warren Hunt has shown to be impossible anyway.

Floods, Lakes and Earthquakes, the 9th chapter, concerns traditions that go as far east as Nebraska. The final chapter simply lists those areas of research which would be useful to people wanting to crack open orthodoxy and offer more sensible explanations of earth pre-history. But I do note that Europe lost almost all its trees at the end of the Pleistocene and since Paul Martin uses that kind of evidence to claim Indians killed megafauna, I return the compliment by suggesting that Europeans slaughtered helpelss trees during the same time period.

“Vine Deloria, Jr., is the most significant voice in this generation regarding the presentation and analysis of contemporary Indian affairs, their history, their present shape and meaning.”, Roger Dunsmore, author Dictionary of Native American Literature.
“At the Ceno-Catastrophism convention in Portland a year ago, Deloria said that he had been researching a major project, a compendium of Indian oral traditions and folklore. He said that for many years, he had been out speaking with nearly every chief, shaman, medicine man, storyteller, and keeper of oral traditions of nearly every tribe in North America. He noted the extent to which virtually every one of these tribes retained descriptions of pliestocene megafauna and, more often than not, dinosaurs. If any of that is true, than much of what scientists think they know about the history of our Earth is certainly wrong.” Ted Holden, The Emerging Science of Catastropism.
Table of Contents

(0) Introduction; (1) Behind the Buckskin Curtain; (2) Science and the Oral Tradition; (3) Evolutionary Prejudice; (4) Low Bridge- Everybody Cross (5) Mythical Pleistocene Hit Men; (6) The Corpora Delicti and Other Matters; (7) Creatures Their Own Size; (8) Geomythology and the Indian Traditions; (9) Floods, Lakes and Earthquakes; (10) At the Beginning; (11) Notes; (12) Bibliography; (13) Index.